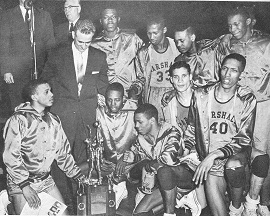 The Commandoes from Marshall finished undefeated at 32-0 and were the first team from the City of Chicago to win the state championship.  This 1958 Marshall team is still considered as one of the finest teams ever to come from the city of Chicago.

Behind Coach Salario:  All Willis, Executive Secretary of IHSA