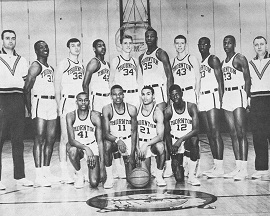 Biography:  The 1966 (Harvey) Thornton Wildcats was one of the strongest teams ever to win the state title.  The season record was a great 30-2 against a traditionally strong south suburban schedule.  The players were unselfish and were considered one of the best defensive teams ever in the state of Illinois.  They averaged 75 ppg while allowing only 52ppg to their opponents.  This was a team that overcame many injuries and set the pattern for teamwork and defense that became the trademark of suburban basketball for many years.