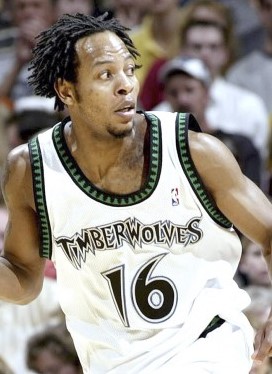 Biography:  Troy averaged 24.1 ppg during his senior year to become the all time leading scorer at Carbondale High School.  He led the Terriers to the 1994 IHSA Class AA state 2nd place .  He earned all state player honors from the Chicago Tribune and IBCA, played in the IBCA All Star for Team South. Troy played at SIUC for two seasons where he scored 1,164 in 55 games which was the 3rd best scoring avg for a season at SIUC and 4th all time points scored in a season.  He led his team in steals in 95-96. Troy is a member of SIU Hall of Fame.  He played in the NBA for Utah Jazz, LA Clippers, Orlando Magic, Minnesota Timberwolves, and Golden State Warriors over several seasons.  (Troy's picture is courtesy of the Minnesota Timberwolves).