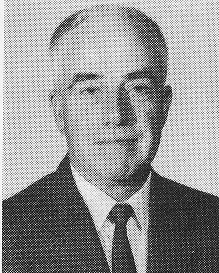 Biography: Cyril E. Allen was inducted into the IBCA Hall of Fame posthumously in 1977. Cyril was one of the most successful grade school coaches in Illinois. Cyril was a teacher for 36 years, Forrest Grade School principal for 30 years and basketball coach at the school for 20 years. Allen’s record was outstanding. During his career, his teams won back to back state championships in 1948 and 1949; second place in 1958; and third place in 1950 and 1953. Allen’s heavyweight team, like their lighter counterparts, won many Livingston County championships and conference titles. For several seasons Cyril also coached grade school teams at nearby Strawn and Wing. This led to an interesting problem in the 1957 Chatsworth GS Sectional Final when Strawn and Forrest met for the championship. Allen straddled the center line as his captains directed their respective teams in a game won 20-16 by Strawn. Cyril Allen passed away on March 23, 1970.