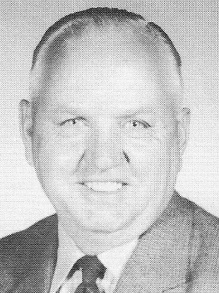 Biography: Russell “Rack” Boeker was a principal and coach at Oakford Grade School (7th and 8th) from 1934 until his retirement June 1, 1972 (38 years). During that time Boeker’s teams filled a trophy cases with first and second place trophies. Seven times either his lightweight or heavyweight team gained the grade school “Sweet Sixteen”, starting with the 1937 meet in Toluca.  Oakford hosted one of the oldest invitational grade school tournaments in the state beginning in 1934 until the school district was reorganized 25 years later. His record (approximate) was 350-70 (heavyweight).  In 1946 a girls’ basketball team was organized in Oakford and Boeker helped coach and manage it to a state AAU championship in its first year as it defeated the Caterpillar Dieselettes. The Oakford girls also added state AAU crowns in 1947 and 1948.  Russell Boeker died on December 7, 1990.