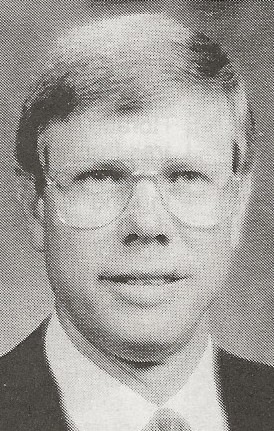 Biography: The 2000-01 Illinois high school basketball season brought an end to one of the longest chapters in Norris City-Omaha-Enfield High School history. David Gray retired after 27 seasons as head basketball coach and 32 years at the school.  Gray, who attended East Richland High School in Olney and played for the late Hall of Fame coach Ron Herrin, compiled a 432-283 record with the Fighting Cardinals. That record included eight Mid-South Conference championships and eight tournament championships. Gray’s clubs won 20 games in eight seasons and the 1989-90 team posted a 31-2 record. Five times Gray’s teams won IHSA Regionals and twice they ruled IHSA Sectionals. The 1990 Fighting Cardinals brought home the third-place Class A state tournament trophy from Champaign. Three times he earned District 20 Coach of the Year honors. Gray served two years on the IHSA Basketball Advisory Committee and served the IBCA as a member of the Board of Directors for several years.  Gray said that even though in 1968, when he graduated from Union University, he didn’t plan on spending his entire career at Norris City. “It has been a great place to teach and coach and I have had great support from the community. I look back with much appreciation to the young men that played for me and the fact they created many tremendous memories for the years to come.”