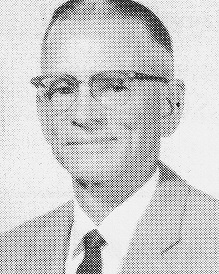 Biography:  Roy “Andy” Anderson certainly was the holder of Lincoln High School athletic tradition for over 4 decades. From 1922-1964 he served the Railsplitters. Andy served as basketball coach until 1945, football coach until 1948 and athletic director until 1964. Prior to moving to Lincoln, Anderson coached for six seasons at Freeport High School and Canton High School. He was one of the organizers of the Big 12 Conference. No complete record of wins and losses is available for him but the gymnasium at Lincoln High School bears his name. Andy’s partial record (16 years) is 195-133. Roy Anderson passed away on September 1, 1986 at the age of 87.