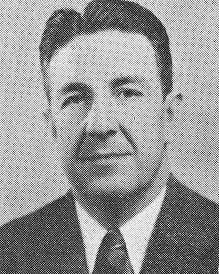 Biography:  The late Paul Beck coached basketball at Oblong HS from 1928-1940 compiling a 206-72 record. Beck’s Panthers ruled the 16 team Eastern Illinois League five times and place second twice. Oblong, under Beck was the first school ever to win the Eastern Illinois and Wabash Valley Conference (100 teams) in the same year (1935-36). Beck coached future IBCA member Frosty Sprowls at Oblong and together they took the Panthers to the Sweet Sixteen in 1937. Beck served three seasons at Thornton HS of Harvey as an assistant coach before serving as a lieutenant commander in the US Navy during World War II. Following the war, Beck served from 1947-71 as an assistant basketball coach at the University of Evansville. During that span, the Purple Aces won five NCAA small college national titles. At both Oblong and Evansville, Beck also served as a football coach.