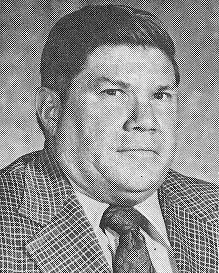 Biography:  Don Kemp was highly regarded as one of the top small school football coaches in Illinois. His teams at Concord Triopia High School include a state runner-up and a state champion. Many forget that Don, who was also the athletic director, track coach, and principal was also the school’s head basketball coach. In his 29+ years of coaching in the Triopia consolidation district, his teams won 514 games against only 195 losses. These seasons include 12 IHSA District championships, 6 IHSA Regional titles and twice was a sectional runner-up. Explaining the multiple duties at the time of his 1979 IBCA Hall of Fame induction, Don said “When I was hired, schools such as ours just didn’t hire two (separate) coaches.” With the success that Kemp enjoyed, most schools would have been happy with just one coach. Coach Don Kemp passed away on August 28, 2006, at the age of 79.