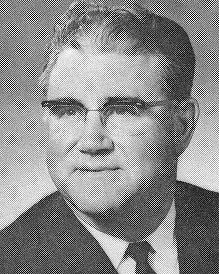 Biography:  John Doxie Moore has the distinction of having played on four Big Ten Championship teams. At Purdue, John played on two football champions and two basketball champions. In basketball, John formed a back court with legendary Purdue player, John Wooden. After his playing days, Doxie Moore became the athletic director, football coach, and basketball coach at Mount Vernon HS. Moore is credited with turning a dormant program into one of the state’s powers. In 1942, John promoted and coached an Illinois All Star team in a winning effort against a similar team from Indiana. He then went on the professional ranks where he coached the Sheboygan Redskins in 1946. He became the commissioner of the National Professional Basketball League in 1948. When the NBA was formed through a merger, Moore took over a losing Anderson Duffy Packers team in mid-year. The Packers did a complete turn around and won their division before losing the eventual world champion Minneapolis Lakers. John helped organize and coach the Milwaukee Hawks before then later moved to St. Louis and Atlanta. John also served the NBA as the supervisor and chief of officials. John Doxie Moore passed away on April 23, 1986.