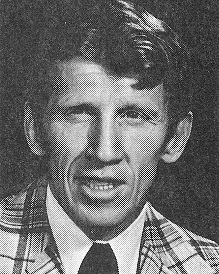 Biography:  Joe Stowell was the head coach at Bradley University for 13 seasons. His 491-240 record supports his reputation as one of the best floor coaches in the nation. Joe coached at the old Armington HS before coming to Peoria Central HS. He then moved up the hill to coach the Bradley University freshmen team for 9 years. During that time three of his squads were undefeated. Joe succeeded Chuck Orsborn (HOF inductee in 1973) as the head coach. His Bradley teams competed in 3 post-season tourneys, finish third in the Conference Commissioner’s Tournament in St. Louis following the 1973-74 season. For that season, Joe was named the Missouri Valley Conference Coach of the Year. Joe coached an all-star team in Brazil in 1975 and remained a highly respected clinic speaker even after his coaching days had finished. As a player, Joe was a member of the 1950 Bradley team that finished second in both the NIT and the NCAA. Joe later served the university as its women’s coach for 2 seasons and as its men’s radio commentator from 1985-2010. Bradley University created the Joe Stowell Award in 2007 to honor one male and one female athlete annually who demonstrate Joe’s love of competition and Braves Athletics. The Missouri Valley Conference awarded Joe the Paul Morrison Award for his 70+ years of dedication to Bradley University during its men’s basketball tournament in 2019.