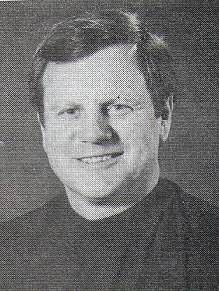 Biography:  There is good reason that the basketball “Home of the Ducks” in Havana is the Robert Gregurich Gymnasium.  Bob, after stints at (Palmyra) Northwestern High School and Chandlerville High School, transformed Havana into one of the outstanding powers in Class A Basketball.  In his 22 seasons of coaching, his teams went 407-176.  His Havana teams were 258-76 over 12 seasons.  The Ducks, under Gregurich, won 5 IHSA Super-sectional games over an 8-year span.  Only once did they return home without a trophy.  Havana placed second in 1978 and 1979; and were fourth in 1982 and 1983.  His Duck teams won 7 Spoon River Conference Titles, 6 Mason County Tournament titles, and 6 Havana Holiday Tournament crowns.  Before getting to Havana, Bob’s teams won three IHSA district titles.  In 1979 Bob was selected as the IBCA Class A Coach of the Year.  He was IBCA District Coach of the Year in 1976, 1978. 1982, and 1983.  His teams have always drawn accolades for their outstanding passing attacks which have cut down probably every know defense in the game.  Defensively, the Ducks have drawn the same recognition.   As Bob left Illinois coaching following his 1983 IBCA Hall of Fame induction to enter private business, his adversaries were glad but always remembered and respected his basketball savvy, knowledge, and overall coaching brilliance.