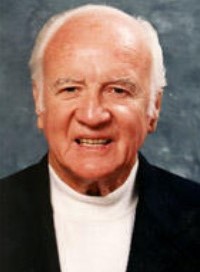 Biography:  Gordon Gillespie served five years as athletic director of Joliet’s St. Francis College after spending 20 years in the same role in Lewis College. In 15 basketball seasons at Lewis his teams were 228-124. Five times his Lewis teams played in NAIA finals at Kansas City. The Kelvyn Park graduate attended DePaul University where he was a basketball standout and following his senior year was selected to the College All-Stars that toured as opponents of the Harlem Globetrotters. As a baseball coach, Gillespie is one of two in the nation whose teams have won more than 1800 games. Gillespie teams in baseball are 917-441. In addition, he has coached the Joliet Catholic team for the past eight years, winning the state championship five times in 1975, ’76, ’77, ’78, and 1981. In 1980 Gillespie received the DePaul distinguished alumni award and was named to the Lewis College Athletic Hall of Fame. In 1983 he received the distinguished service award from the National Federation of State High School Associations.  Gordie left St. Francis in 1995 but returned 10 years later as a baseball coach until 2011.  Coach Gillespie passed away on February 28, 2015.