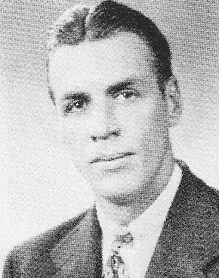 Biography:  John Tracy began his coaching career on a collegiate level at St. John’s College in Toledo, Ohio from 1930-37. He then coached at St. Ignatius where his teams won the very prestigious Knights of Columbus Tourney 2 times. He then went to Mt. Carmel from 1943-1946. While at Mt. Carmel, his teams won the strong Catholic League Championship two straight years. These two teams not only were super, but they also won the City Championship in 1944 with an undefeated season. He also coached at Loyola from 1946-1949. John retired from coaching in 1949, but this didn’t stop his sports activities. He was also an outstanding basketball and football official, working in the Big Ten for many years. John was an NFL referee for 12 years.