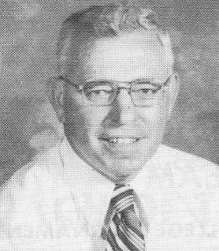 Biography:  Don Vandersnick coached high school basketball for 20 years at Homer, Effingham, Newman, Galva, Batavia, Wheaton Central, and Lincoln. His teams own a composite 363-203 record while winning 18 conference titles and 13 IHSA Regionals, along with several sectionals. His 1963-64 Galva club was the only undefeated team in the state before the start of eliminations. For two years straight, Vandernick was named Little Seven Conference coach of the year. Most notable, Vandernick protégés are Dan Issel of Batavia, who went on to All-America honors at Kentucky before NBA tenure with the Denver Nuggets; Ken Anderson, from Batavia, who went on to stardom as a football quarterback at Augustana and the Cincinnati Bengals, and Dan Lapan, coach at Blackhawk Jr. College in Kewanee.  Don passed away on May 8, 2003.