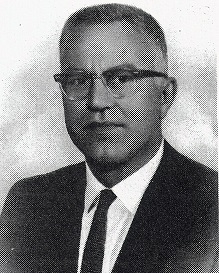 Gil Love began his basketball career as a player on three conference high school championship teams, two Regional championship teams and played in the state tournament in 1928.  At Western Illinois University, Gil made the first team for three years, was the team’s most valuable player in 1932-33, and was selected to the WIU Hall of Fame in 1933.  While coaching at Griggsville, Mendon, Morris, and Ottawa; he complied a total record of 505 wins to 209 losses.  During his 26 years of coaching, his teams won 42 conference and tournament championships.  Included in this are 12 Regional and 8 Sectional championships.  His teams made 8 trips to the State Tournament in his 16 years at Ottawa with a 3rd place finish in 1957.  Gil is a member of the Ottawa High School Hall of Fame.  In 1992 a memorial scholarship was established at that school in his name after his passing on January 11, 1992.