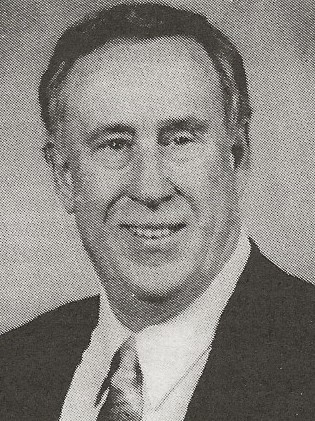 Biography:  Tom Ashman coached basketball successfully in Illinois for 27 years on three different levels. Ashman was in command for 768 games before retiring in 1995 with a 491-277 record.  After three years at Murphysboro Junior High School from 1967-70, Ashman moved to Murphysboro High School and turned a losing program into a perennial Class AA Southern Illinois power. In nine seasons his Red Devils won three Southwest Egyptian Conference championships, four Class AA regionals and one sectional. Ashman’s final coaching stint began in 1980 at John A. Logan College in Carterville where he posted a 295-183 record in 15 seasons.  Several of Ashman’s Logan teams gained national rankings - ninth in 1989-90 and sixth in 1994-95. The Volunteers hosted an invitational tournament 15 times in Ashman’s reign and won 11 of them. In 1973, Ashman founded the Murphysboro Zips, a group of elementary school-aged children who performed ballhandling skills.  Ashman served the IBCA and is a past president of the Southern Illinois Coaches Association. In 1990, Ashman was named coach of the year by the conference, Illinois Junior Colleges and IBCA. Again in 1993, Ashman received IBCA and conference honors. In 1995, he received IBCA district honors and was named NJCAA Region Coach of the Year. He was inducted into the Murphysboro Hall of Fame in 2000.