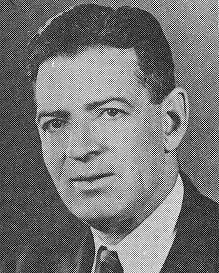 Biography:    Joseph Cogdal was one of the great pioneers in the coaching profession.  He developed both the ‘Normal’ offense and the ‘T’ defense which was the first of its kind—a ball zone pressing defense.  He also introduced changing defenses from one play to the next.  Joe has been inducted into several Hall of Fames:  Helms Foundation, NAIC, National Hall of Fame, Millikin and Illinois State Athletic Halls of Fame.  The IBCA induction is his first honor that is solely for basketball.  Joe coached for 22 years at Illinois Normal (now Illinois State University) and was associated with basketball for 41 years as a player and coach.  His Illinois Normal teams won eleven championships and seven conference titles.  Joseph passed away on July 3, 1978.