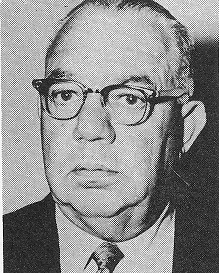 Biography:   Lowell (Pops) Dale was one of the coaching giants in Illinois.  He coached at DuQuoin for one year, taking them to the state finals.  He then coached for 28 years at Streator where his teams won 500 games against 247 losses.  His best season was in 1941-42 with a 31-2 record.  He took 9 teams to the state finals.  His teams won 13 of 15 district titles from 1920-1935.  They won five Big 12 titles plus numerous holiday tournament titles.  Lowell served as president of Illinois Valley and Big 12 Coaches Associations.

“Pops” was a great believer in fundamentals, and had the greatest respect from his players and officials alike.  He has been credited with doing more to instill character in Streator area boys than any other man of his time.  Just before his death in March, 1974, “Pops” was thrilled to learn of his selection into the IBCA Hall of Fame.