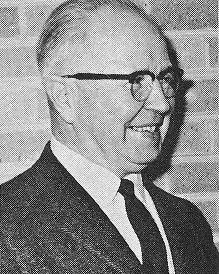 Biography:  Mel Johnson attended high school at Elburn and went on to Northern Illinois University.  During his career he won a total of 563 games against 332 losses in 35 years of coaching at Geneva HS.  His teams won nine district championships, three regional championships, and made one trip to the state finals in 1963, making them one of only eight district schools ever to reach the Elite 8.  Unfortunately, Mel passed away a few years before his 1974 induction.