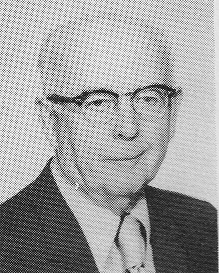 Biography:
F. Merritt Allen was enshrined into the IBCA Hall of Fame in 1976 as a “Friend of Basketball”.  Two years later the recognition comes for his coaching accomplishments.  His outstanding career included stops at high schools in  Eldorado, McLeansboro, and Carbondale before beginning a 28 year stay at Freeport HS as basketball coach and athletic director.  Allen’s 1937 and 1938 Carbondale teams reached the Sweet Sixteen. His 1942 Freeport team finished 3rd in the IHSA tournament.  Merritt holds the unique distinction of earning six (6) basketball letters at Southern Illinois University—in that era he was allowed to earn 2 letters while still in high school.  He is a charter member of the SIU Hall of Fame.