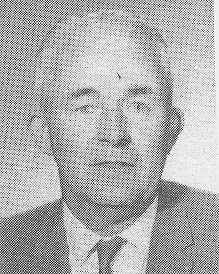 Biography:
Vernon Drenckpohl left his mark on high school basketball as a player, coach, and fan.  Vernon played for Centralia’s 1922 State Championship Team before taking his skills to the squad at the University of Illinois.   His 29 year coaching career began with a 2 year stint at Clayton in 1929. From 1931-1943 he was at Argenta HS, from 1942-53 at Vandalia, and from 1953-57 at Sycamore.  His Vandalia teams won 7 regional titles while compiling a 216-127 record.Three of those teams placed as high as 3rd at the prestigious Centralia Holiday Tournament.  At Sycamore his teams won 2 conference titles and the DeKalb Holiday Tournament in 1956.  His 1955 team lost the sectional finals to Rockford West.  Vernon is cited in the Ten Great Basketball Offenses as the developer of the “Illinois Continuity Offense” while at Vandalia thus having a “profound influence on basketball.”  Vernon Drenckpolh passed away on May 10, 1996.