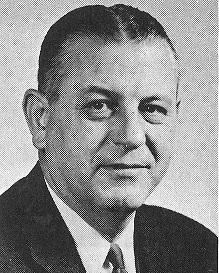 Biography:  Doug Mills won three Big Seven Conference basketball championships at Joliet High School from 1930-35 with his final team there reaching the Sweet Sixteen.  The following year, Mills made Champaign his home as he began his work as the athletic director and basketball coach for the University of Illinois.  In 11 seasons as Illini coach, his teams were 88-47.  Those teams won 3 Big Ten titles.  His most famous teams were the “Whiz Kids”—Andy Phillip, Bene Vance, Jack Smiley, Ken Menke and Vic Wukovits.  This team went 13-2 for a Big Ten record in 1943.  The following year when Art Mathisen replaced Wukovits, the Illini were 12-0.  Mills was a member of the Big Ten’s original committee on television for football and basketball.  He was also a member of the United States Olympic Basketball Committee.  Doug is a member of the IBCA Hall of Fame as a player (1976) and as a coach (1975).  He passed away on August 12, 1993.