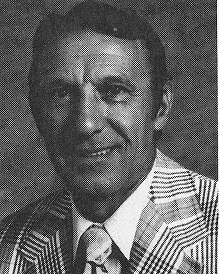 Biography:  In 20 seasons as basketball coach at Herrin Junior High, Mike Sortal’s teams compiled a 356-94 record.  His teams have earned 4 first place, one second place, three third place and one fourth place finishes in the Illinois Junior High School Athletic Association tournament.  This group covers the lower third of the state and is usually considered the Southern Illinois Championship.  Additionally, in two years at Karnak, Mike’s teams netted a 42-9 mark.  At the time of his IBCA Hall of Fame induction in 1975, he was the assistant principal at Herrin and secretary-manager of the IJHSAA.  Mike Sortal passed away on December 22, 2013 at the age of 89.