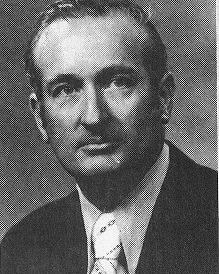 Biography:  At the time of his 1975 IBCA Hall of Fame induction, Bill Wall was the only men’s basketball coach that MacMurray College in Jacksonville had ever known.  Wall had the difficult task of changing the image of the 100-year old women’s school into a co-educational institution when he arrived in 1957.  Bill coached soccer, tennis, golf, and lacrosse at MacMurray in addition to basketball.  In basketball, Wall’s teams won 186 and lost 251.  Highly respected by his peers, in 1975, Wall left MacMurray College to become executive director of the Amateur Basketball Association of the United States of America (ABAUSA), a position he held for 18 years. During his tenure, Wall led the transition that allowed NBA players to be eligible for international competition and shepherded ABAUSA’s transition to USA Basketball. Wall’s first USA team of NBA players was the 1992 “Dream Team,” which captured the gold medal at the 1992 Barcelona Olympics.  He became a driving force of USA Olympic basketball.  For his work, Wall was inducted into the National Collegiate Basketball Hall of Fame in 2009 in a class of inductees including Larry Bird, Earvin “Magic” Johnson, and Jud Heathcote. Coach Bill Wall passed away on August 4, 2014.