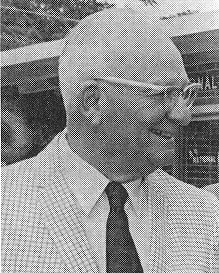 Biography:   Ned V. Whitesell brought Danville basketball into statewide prominence as its coach from 1931-1945.  Ned compiled a 70.6% winning record while coaching at Fairbury, Pekin, and Danville.  At Danville his clubs posted a 176-97 record.  Whitesell took his 1921 Fairbury club to the state tournament.  He brought Danville to Champaign for the tournament for the first time in 1935 and retuned the following year with an unbeaten club which lost the championship game to Decatur, 26-22.  Three Danville teams under Ned posted Big 12 Conference Championships in 1936, 1937, and 1939.  He also served Danville as the football coach from 1931 to 1946.  He spent 10 additional years as athletic director until 1956 when he left athletics.  In retirement Ned returned to his native Bloomington.  Ned Whitesell passed away on August 11, 1984.