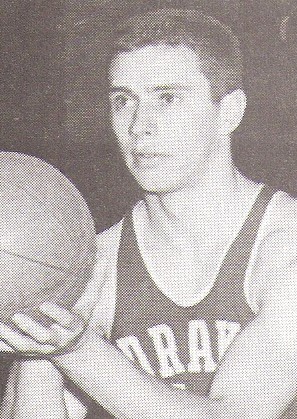 Biography:  John Rennicke led Aurora East to its first State Tourney appearance in 31 years in 1947. Rennicke couldn’t do it all, however, as Pinckneyville topped the 19-8 club 45-34 as Rennicke scored 23 of his team’s points. Rennicke averaged 17.8 points to set the single season scoring record for Aurora East. Rennicke was the first player in Drake University history to score 1,000 points in a career when his total was 1,076. As a junior, Rennicke scored 431 points to lead the Missouri Valley Conference. He owned every Drake scoring mark at one time, including 31 against Detroit in 1951 for the one-game mark. Rennicke’s 72 free throws bettered by 24 the MVC record set 26 years earlier for a 12-game season. Twice Rennicke was named to the all-MVC honors and in 1951 was named Honorable Mention All-American. Twice Rennicke was named Most Valuable Bulldog basketball player and was the Drake captain in 1951. Drafted by the Tri-City Hawks of the NBA, Rennicke played with the Tri-City and the Milwaukee Hawks. Rennicke also played the same two seasons as member of the Chicago Cubs minor league organization. John Rennicke died on December 9, 2007.