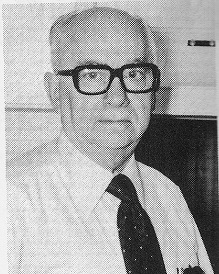 Biography: It is hard to imagine an Illinois high school basketball fan who has never seen a state tournament game on television.  Effingham’s number one fan, Dr. Dwight A. Niccum doesn’t need television since he had attended every state tournament game from 1932-1976.  A booster, both vocally and financially since his high school days at Effingham High School, Niccum was awarded an EHS blanket in 1974 for his many contributions.  Dr. Niccum claims there is little reason for being named to the Hall of Fame, but it is common knowledge that Niccum chauffeured many players to away games in his father’s car long before the advent of school busses.  Dr. Niccum passed away on January 19 1982 at the age of 74.