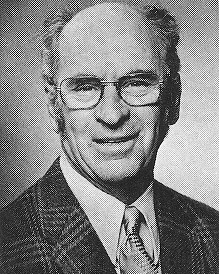 Biography: John J. Meagher happened to walk into the (Elgin) St. Edward High School gym at the half time of a game in 1946 and was asked to take over as time keeper.  He did and did not relinquish the job for over 30 years.  When John started timing it was a different game than today.  He used two stop watches—one for running time, and one for time outs; a horn was used for substitutions; cards were flipped to show remaining minutes; the referee was notified two minutes before the end of each half; a whistle was used for the end of each quarter, half, game.  In the first 29 years of service to the school, John missed only 5 games.  His wife Margaret was seated just behind him for these years.  John passed away on February 10, 1985.