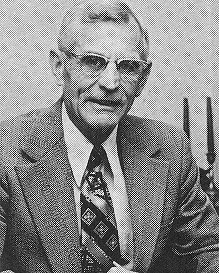 Biography: Robert “Bob” Miller was properly honored November 16, 1974 for his extraordinary contributions to the Monticello athletic program and to the Okaw Valley Conference programs.  As the owner and operator of the Country Charm Dairy Bar in Monticello, Bob attended over 1,500 Okaw athletic contests spanning 45 years; he traveled 60,000 miles in his pursuit of the games.  To the Okaw champions, Bob served 760 steak dinners; he gave 11,600 quarts of milk to the townsfolk of Okaw champions; he fed 4,275 banana splits to Okaw champion student bodies; and he gave 3,230 postgame milk shakes and sandwiches to various Okaw teams.  Before his generous gifts, Bob was a very good basketball player at Monticello HS, being named as the first player to be all Okaw Valley for three years (1931, 1932, 1933).  With teammate Harry Combes, he was half of the famed “Monticello Scoring Twins”.  Bob Miller passed away on July 21, 2017 at the age of 101.