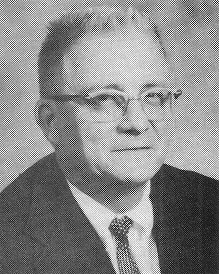 Biography: Robert Israel served as official scorer for Armington Grade and High School, and at (Stanford) Olympia High School since it was formed through his HOF induction in 1981. Former Bradly University basketball coach Joe Stowell, who once coached at Armington, said of Israel, “There were seasons when Bob devoted 70-75 nights to scoring games. During the 33 years he has served, he has won the respect and admiration of all those who have been fortunate to make his acquaintance.” Israel was afflicted with polio as a young boy and has been on crutches ever since. It did not keep him from hunting pheasants and mushrooms, nor serving as the assistant scorer at the 1955 IHSA State Tournament and as head scorer for the 1956 IHSA Tourney. Israel has served as official scorer for IESA state grade school tournaments held at Olympia from 1972 through his 1981 induction. Bob passed away on September 29, 2012 at the age of 92.