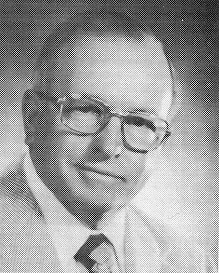 Biography: Chris Ringhausen served as official basketball scorer from 1944-1971 at Jerseyville High School. In those 27 years, Ringhausen can remember missing only two games and those were because of illness. Ringhausen also served as official timer for 10 years for the football team. Chris was chosen as the assistant scorer in the 1954 state tournament; he then served as chief scorer the next year. Ringhausen used his personal car to help transport the basketball team to away games from 1944 to the mid 1950’s at any time that bus transportation was a problem. A member of the school board for 14 years, he helped hire four coaches, one of whom is a member of the Hall of Fame. An original member of the Lewis & Clark College Board, the civic-minded Ringhausen served as a member of that board for 35 years. In 1998, the college named its new music building for Chris. Chris Ringhausen passed away on September 29, 2005.