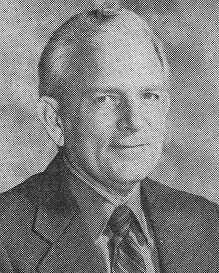 Biography: Russell Furr was a super friend of basketball at Roanoke-Benson High School. Not only was he the official scorer for the Rockets from 1953 through 1982, Furr served as freshman-sophomore coach for 20 years. He saw 523 R-B victories and his underclass teams complied a 298-113 record. More important than his record, Russ developed the talented young players that contributed so much to the success of R-B basketball. A teacher in the R-B schools for 30 years but no longer coaching, Furr remained an extremely valuable part of the R-B programs. Former basketball coach Roger Wiseman says of Furr, “Since his retirement from coaching, his help didn’t cease. We at Roanoke-Benson know Russ Furr is part of every win we have.” Furr also served as a track and cross-country coach. Russell Furr passed away on May 6, 2012 at the age of 83.