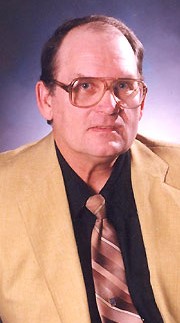 Biography: After being the first graduate from Centralia City Schools with perfect attendance, Billy became a football and baseball player in high school.   His grand slam home run in the IHSA Sectional Championship game propelled the Orphans to the school’s first IHSA Elite Eight baseball appearance in 1962.  From 1956-2012, Billy attended every Centralia Holiday tournament game.  He attended nearly every Orphans’ game, home or away, for nearly 30 years.  In 1985, he attended an amazing 165 games.  Since 1957, he watched every state finals game, either on TV or in person.  He served for many years on the Centralia Sports Hall of Fame committee.  In 2012, he was inducted into the Central Sports Hall of Fame.  Bill “Pops” Taylor died on May 19, 2020 at the age of 92.