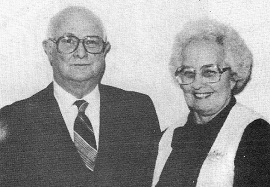 Biography: Upon their Hall of Fame induction in 1983, John and Lois Price had been married not only to each other for 44 years, but also to Streator High School basketball. Season ticket holders since 1945, the Prices attended virtually every Bulldog game since 1960 including tournaments at Morris, Pontiac, Centralia, and Pekin. John Price helped organize the Streator YMCA church basketball league for grade school boys in 1950, serving as its first president and coaching a team in it for more than 15 years. In 1969 they were presented a plaque for their loyalty to Streator High School athletics. The following year they helped organize the Bulldog Booster Club and served as president for three years. They were recognized by the Booster Club with jackets in 1980. At a 1982 Fan Appreciation night, the Prices were presented a plaque for 37 years as season ticket holders. John Price was on the board of directors for the Streator High School Hall of Fame. Don Morris first played his way into the Prices’ hearts as a Streator standout in the early 1940’s, but other Bulldogs like Gary Masley, Bull Rohlman, John Bailey, and Jodie Harrison also have found a place there. Their enjoyment of high school basketball and the kids who play it could only be exceeded by the endearment they attracted from Streator basketball fans, administrators, coaches, and players.  John Price died on October 21, 2003 followed by Lois, nearly a decade later on February 22, 2013.