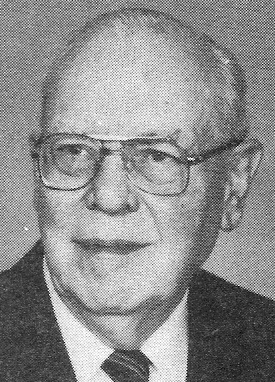 Biography: George C. Arbeiter was truly a longtime basketball fan, dating back to 1914. For many of those years Arbeiter played and followed the game in and around Joliet and had the opportunity to share experiences with members of the James Naismith family. Arbeiter moved to Aurora in 1935 and since then was an avid Aurora West booster. At age 84 Arbeiter never missed a game, a habit established many years ago. Arbeiter many times couldn’t wait for game night and would visit Blackhawk practices. Arbeiter was dubbed by WMRO radio in Aurora as the Elder Statesman for the Aurora West Fans Club. His loyalty to coaches and players and his comradery with 2.5 generations of fans is near legend in Aurora. Arbeiter once said he “was greatful for 10 years playing and 60 in the bleachers.” He was always upbeat and optimistic about Black Hawk teams and said he considered his enthusiasm to be “One Magnificent Obsession.”  George died on January 27, 1994 at the age of 91.