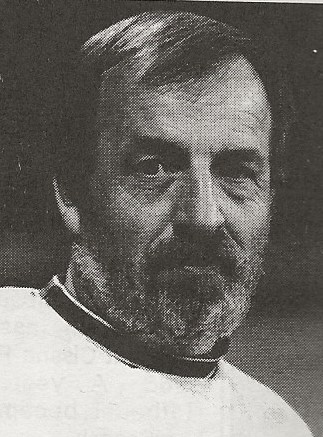 Biography: Steve Kuipers had served as the scorekeeper for boys’ basketball games for more than 30 years at Gilman High School and its successor, Iroquois West, at the time of his induction. He began scoring when Iroquois West basketball coach Harry Kunsch was in seventh grade. Kuipers is more than just a dependable, top-rate scorekeeper, he is a huge Raiders fan and program supporter. A resident of Danforth, Steve and his wife Linda have two sons, Thad and Andy.  Kuipers was involved in a serious automobile accident in 1966, and after a three-month hospital stay, he was left with his legs permanently injured. That fall Gilman Junior High coach David Conrad asked him to keep the scorebook at junior high games. Two years later, Kuipers moved up from the seventh grade team to score for varsity coach Dan Slack. In 1973, Kuipers scored for old high school classmate Bill Harrison, who said, “Steve loves the game of basketball, but it’s the relationship he has with many former athletes that Steve treasures. Steve would know if a kid had a problem and insights to team chemistry that helped during my coaching tenure.”  In the early 1980s, Allen Smith played for Gilman. Kuipers especially liked Smith as a person and basketball player. Allen’s family couldn’t afford extras and it bothered Kuipers that Allen didn’t have a lettermen’s jacket. In the spring of Allen’s junior year, Kuipers ordered one for him for his senior year. Tragically, Smith died in a swimming accident that summer. Kuipers forever regretted that Smith never got to wear his own letter jacket.  Shortly after the Iroquois West consolidation, CUSD 10 saw a referendum fail and all athletics were to be dropped. Kuipers was instrumental in helping form the booster club that worked to fund all extracurricular activities during those lean years until the district could financially assume responsibility again.