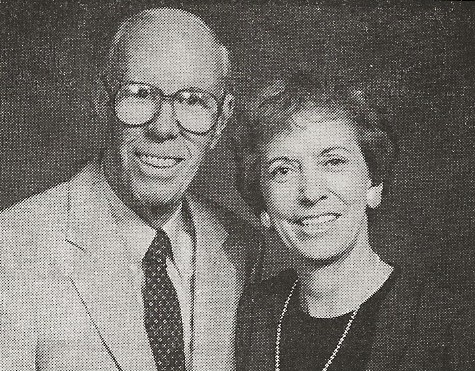 Biography: Fred and Maureen Bryant felt that “There’s nothing like watching a high school basketball game for an evening’s enjoyment.”  To add to the excitement, the Bryants have had seven sons (Pat, Mike, Fred, John, Jay, David, Mark) who have played high school basketball.  John, Jay and David played on Aurora West High School teams that finished 2nd in the IHSA State Tournament and 3rd (twice) in the IHSA State Tournament.  Jay and John earned all-state player honors.  Fred and Jay became high school basketball coaches.  Besides the sons, the Bryants had 4 daughters who were big cheerleaders for their brothers.  Ten of the Bryant children attended college and became teachers, coaches, lawyers, CPA’s, and business professionals.  The Bryants felt that “they tried to be good basketball parents, making sure that their sons and other players had rides to and from practice and were always on hand to cheer for their favorite team.”  When players were confused about the recruiting process, Fred gathered data about the schools to help the players make proper decisions.  The Bryants felt indebted to their sons’ coaches for their influence on their lives during those important teenage yeras.  Fred died on October 25, 2007 followed by Maureen on April 22, 2018.