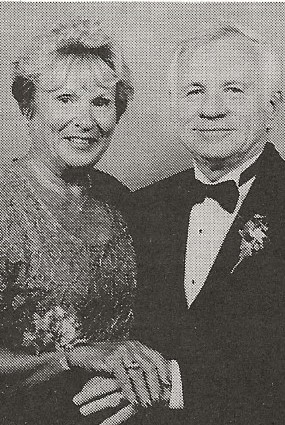 Biography: Aurora is a great sports town separated by the Fox River. For as long as anyone can remember the rivalry between East and West high schools has somewhat defined the city and its residents.  In 1948, Dick Wyatt ended what would be a Hall of Fame career in football, basketball and track. Across the Fox River, Carole was just learning the importance of high school sports. Little did they know they would build a bridge between that rivalry which defined their differences and brought them together for the next 50 years.  Dick and Carole Wyatt were generous providers, supporters, ticket brokers, and most of all, loyal Blackhawks Boosters since they settled on the West side in 1954. Not only did they raise seven children, who participated in athletics at all levels, they also had the desire to touch the lives of many of the athletes who walked the halls at West High. Although best known for their passion for basketball, as evidenced by their unfailing attendance at all games for decades, they were also well known for the development of the boys and girls tennis program.  Long after their children left the halls of West High, their grandchildren provided the same, if not a greater level of enjoyment for the Wyatts. Football, cheerleading, badminton, tennis, swimming, basketball, track and field, baseball, wrestling … all these programs felt the magical touch of Dick and Carole Wyatt. Their love crossed the Fox River and three generations of athletics benefited greatly from Wyatt loyalty, generosity and devotion to Aurora West.  The Blackhawks’ 2000 Class AA state basketball championship was certainly a fitting prelude to Dick and Carole Wyatt’s induction to the IBCA Hall of Fame. They were married for 59 years when Dick died on September 20,  2012 at the age of 81. Carole died on August 4, 2015 also at the age of 81.