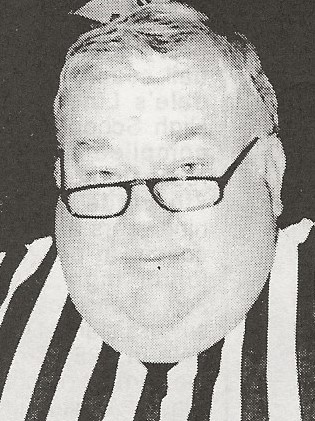 Biography: John “Tex” Calvert started working toward a long reign as basketball scorekeeper for Carterville High School in the sixth grade. He continued in that role until he was a senior and was drafted into the scorekeeping role. “I guess you might say I fell into the scorekeeping job,” Calvert said.  Calvert was Carterville’s scorekeeper for 51 years. While keeping the book there, Calvert became acquainted with Bob Brown when he coached at Eldorado. “When Brown took the head coaching job at John A. Logan Community College I asked him if he needed a scorer,” Calvert said. “I guess I wanted to vary my scorekeeping. That’s why I volunteered for the Logan job.” Calvert was the official scorer at Logan for 32 years. He kept the book for the men’s team and when Logan hosted the Region 24 junior college women’s tournament.  Calvert figured he kept score for about 100 games a year as he did the varsity and junior varsity book at Carterville in addition to the chores at Logan. He also filled in at Southern Illinois University whenever needed.  Calvert remembered the night Arnie Crain scored 63 points back in the 1970s against Carrier Mills. He was also a member of the football chain gangs at Carterville for 35 years and SIU for 30 years.  John Calvert died on April 4, 1997.  His HOF induction came posthumously.