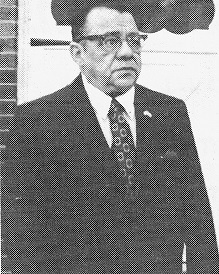 Biography: Jimmy “Doc” Lee has been associated with Pekin High school as a trainer and manager for over 40 years, as of his 1973 induction.  He has been with teams that have played in the state tournament 14 times, including two state championship teams, two third place teams and two fourth place teams.  He began his career at Pekin in 1933, at the age of 15 as a student manager under Coach A.G. “Frenchy” Haussler and later served Jim Lewis, Gordon McKenzie, Harry Anderson, Bob Cain and Dawson Hawkins.  Jimmy is a lifelong resident of Pekin and was previously inducted into the Pekin Hall of Fame.