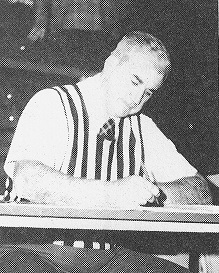 Biography: Tom McKie was one of the real basketball fans in Southern Illinois for over 30 years.  A graduate and native of West Frankfort, Tom has received many awards due to his service to basketball in Illinois.  He was the scorer for the State Tournament in 1962 and 1963. Tom was voted the “Sportsman of the Year” by the Egyptian Officials Association in 1964.  As of his induction in 1973, Tom was still the official scorer for West Frankfort High School—he began in 1942.  He also was the basketball coach at St. John’s grade school from 1945 until the mid 1970’s.  Tom McKie passed away on January 8, 1992.