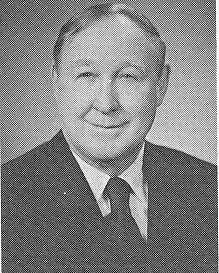 Biography: Harry Fitzhugh served a long and distinguished career in the field of athletics.  A three-time letterman at (Rockford) Auburn HS and a two-time letterman at Eastern Illinois University, Harry received his masters degree from the University of Illinois in 1941.  Many years of teaching and administration (as both a principal and superintendent), prepared him for the next step in his career.  He became associated with the IHSA in 1946.  He became a member of the Legislative Commission and the Board of Directors.  He acquired the excellent background that led him to serve the organization as an outstanding Executive Secretary.  Additionally, Mr. Fitzhugh served as an official in football and basketball for many years.  Few individuals have done more to serve the cause of interscholastic athletics in the state of Illinois.  He advanced the cause of athletics by focusing on citizenship, scholastics and sportsmanship.  At the time of his induction in 1974, he was one of the most influential sportsmen in the nation.  Harry passed away on June 29, 2003.