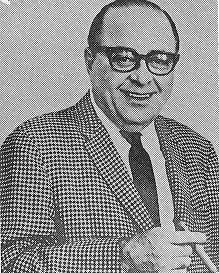 Biography: Harry Hannin is the “Man behind the scenes” of the Harlem Globetrotters.  IBCA Hall of Fame member and fabulous owner-coach Abe Saperstein thought of Hannin as his “First lieutenant” and called him “one of my best friends and severest critics.”  Also involved with boxing promotion, Harry always maintained an active interest in athletics.  Harry passed away on November 14, 1989.