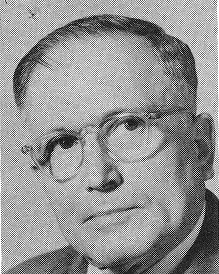 Biography: Homer R. Herrin was a scorer, timer, and fan who saw more than 100 games pr year for 40+ years.  He was a regular visitor at the Centralia Holiday Tournament.  He also watched games at all levels of basketball.  In his college years he was an outstanding pitcher for Indiana Central College in the 1920’s.  Even after his retirement from being a Methodist minister, Homer stayed busy watching his two sons: Rich of Benton and Ron of Olney; coach their teams.  Sadly, Homer passed away on December 7, 1975 and did not live to see both of his sons inducted into the IBCA Hall of Fame (Rich, 1983; Ron, 1985).