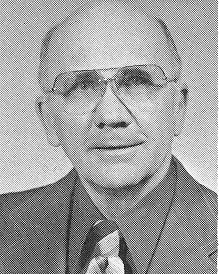 Biography: Rick Edwards (his broadcast name) began his career at WRAC, Racine, WI; in 1952. Before broadcasting, Rick graduated from (Freeport) Aquin High School in 1938 and had a distinguished military career during WWII. Rick moved to Rockford’s WRRR in 1953 and later to WROK. Edwards’ 1,200+ basketball game career covered all six of the Rockford high schools in addition to hosting a talk show on which many nationally known sports figures of that time were guests. In 1965, Rick moved west to Freeport where he eventually became the vice president and general manager of WFRL and WELL-FM. He covered all sports on all levels, boys and girls. Rick helped those stations become the originating station in several networks. Later, he became vice president and general manager of Triadd Stations, owner and operator of radio and cablevision stations in Michigan, Indiana and Illinois. From Chicago to Centralia, Edwards has described the play of the Freeport Pretzels. One of his career highlights was being part of the broadcast team for the state tournament games in Champaign for 14 seasons. Rick’s given name was Ed Richter. Ed passed away on July 20, 2015 at the age of 94.