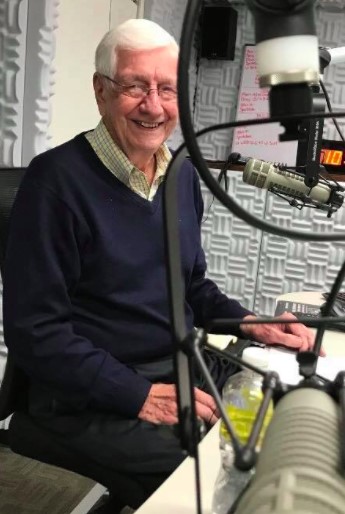 Biography:  Jim Turpin began a broadcasting career while a senior at Olney High School where he was an all-conference player and was an honorable mention all-state player for the 1949-50 season. After announcing for the Armed Forces Radio and Television, Jim returned to the Champaign areas to describe both prep action and the University of Illinois football and basketball games. He did this as an undergraduate student at the university for WDWS in Champaign. After graduation Jim continued the play-by-play for WILL in Urbana. In 1962, Turpin added work at WTAX to his state high school and U of I football and basketball duties. Jim was the radio voice of the Illini from 1960 through 2002. For many years Jim worked both the Class A and AA boys’ tournaments in Champaign. On December 22, 2017, Jim finally retired completely. He had aired the popular call in show, “Penny for your Thoughts” for 40 years.