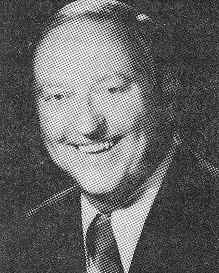 Biography: Dick Martin was one of the busiest sports announcers in Illinois in the 1960’s and ‘70’s. Starting at Watseka radio station WGFA, Martin did high school sports and a coaches’ corner program. In 1963, Dick began broadcasting the Illinois State tournaments for the IHSA. In 1970 he added the University of Illinois games for the Mutual Network. In 1972, he formed the Bromar Sports Network for Illinois football and basketball games. They also broadcast the Hambletonian Trotting Race. From 1973-77, Dick broadcast Big Ten games for CBS and in 1978-79 he began describing Notre Dame action for the Mutual Network. The Bromar Network broadcast the first Illinois All Star game sponsored by the IBCA. It is believed that his WGFA station had broadcast more high school games than any other station in Illinois.  Dick Martin passed away on March 19, 2020.