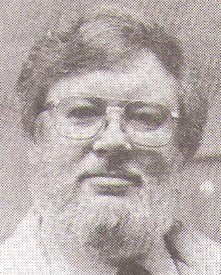 Biography: Bernie McCarty served for 25+ years as the Sports Editor of the Worth-Palos The Reporter.  He followed basketball throughout the southwestern suburbs of Chicago.  His work was so appreciated by the coaches of the former SICA North conference, that they unanimously approved of his hall of fame nomination.  Bernie felt that his syle of writing was reflective of an earlier era.  He wrote with a great deal of enthusiasm with plenty of adjectives used to create a clipping that players could show their own kids in later years.  Bernie realized that very few of the athletes he covered would ever go on to collegiate success so he tried to give them great coverage for their high school successes.  He showed who won the game in the first paragraph as he felt that readers preferred this to the style where the winner was shown at the end of the article.  He refused to print negative information and did not name a kid whose mistake led to a loss for his team.  Bernie was devoted to high school sports and those who coached and played them.