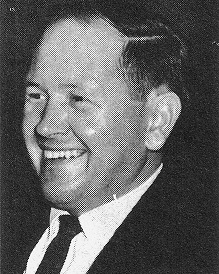 Biography: Vernie Moffitt began writing sports for the Waterloo Times in 1953 and his column “Vernie’s Varsity Notes,” became well known.  Sports programs which were started by Vernie were:  1) The Vernie Moffitt-Waterloo Times Free Throw Award; 2) The Jaycee “Player of the Year” award; 3) Organizing the high school sports banquets, 4) the Vernie Moffitt Basketball Calendar which included schedules for 70 high schools.  Vernie died in 1969 due to heart failure.  He was only 38 years old.  He had struggled with heart problems throughout his life and was not expected to reach the age of 21.  He dedicated his years to trying to impress young athletes that sports activities were of the utmost importance.